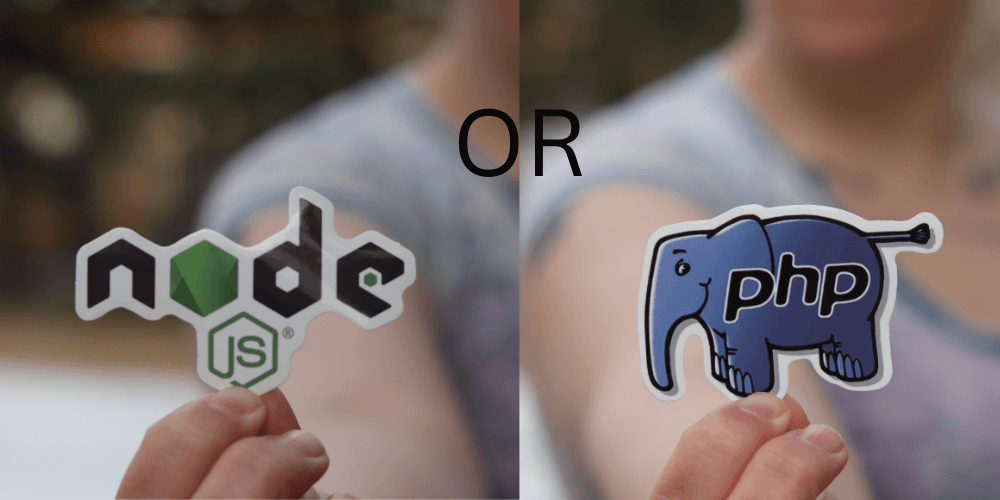 Node.js or PHP – Which is better?

In earlier days of the web development arena, different technologies were used for front and back-end development. But, with the launch of Node.js, the complete scenario changed as it allowed developers to write the backend code using JavaScript. This eventually gave birth to MEAN stack web development framework using JavaScript right from front-end to backend and even databases (MongoDB -JSON). Before Node.js, web development was usually done with the help of PHP as it easily integrated with HTML and helped developers to build dynamic websites in no time. In this post, we will compare Node.js VS PHP and see which one best suits the current industry requirements.

The basic difference between PHP and Node.js is that PHP is a programming language and Node.js is a runtime environment based on Chrome’s V8 JavaScript Engine.

We at Alea, use both PHP and Node.js to deliver a robust web solution based on your preferences. We have a talented pool of PHP and Node.js developers working on some cool projects – going to be live soon. Hire them to make your dream project come true and that too without over boarding your budget. Send us your project details at [email protected] and we will guide you right from the technological aspects of your project to help you make a marketing plan and promotion tactics.

Coming back to Node.js VS PHP, it is a battle which anyone can win as the result is based on the type of website you are developing. Let’s say if you want to build a real-time chat application, then preferring Node.js over PHP is a wiser decision as it can easily handle large client requests at once. But, that doesn’t mean PHP is out of the game, read the full Node.js VS PHP post to know the whole story.

1. Performance:
Node.js clearly wins this round because of its event-driven Non-blocking I/O model. Due to this model, Node.js is able to handle large server requests as compared to conventional backend technologies. PHP follows a blocking model in which multiple threads are created on the server side to handle multiple client requests. It results in high server load and response time if the code is not optimized.

2. Hosting and deployment:
PHP applications can run on any server including Nginx and Apache and platforms (Windows and Linux) which makes their deployment process a lot easier task whereas, in the case of Node.js, you need a virtual server with SSH access. Therefore, PHP deployment is feasible for smaller corporations and individuals without any knowledge of console commands and Secure Shell (SSH).

3. External dependencies:
Node.js has fewer dependencies. You can set up a web server with just a few lines of code but in order to run PHP applications, you need external server software. Node.js developers just need NPM (Node Package Manager) to find Node modules that they can easily integrate within their applications to provide additional functionalities.

6. Environments:
You can use Node.js for desktop app development (Windows, Linux, and Mac), mobile application development (hybrid and cross-platform apps), and even build console-based apps. Though there are workarounds by which you can use PHP to target the specified platforms, most developers usually don’t use it.

7. Community Support:
As PHP (almost 20 years) is relatively older than Node.js, it is richer in terms of online resources like documentation, FAQs, and codebase. So there are good chances that someone else might have also tried what you are trying to accomplish with your code and take help from it. On the other hand, Node.js has seen large traction from developers and organizations, but it has quite a less number of supporting resources to help developers.

8. Learning curve:
Writing Node.js code isn’t easy for newbies and even for JavaScript developers as they first need to understand some complex concepts like web workers and callback functions before getting started. On the other hand, PHP is quite a friendly programming language for beginners in web application development.

The result of the Node.js VS PHP battle is a tie as both technologies have their own pros and cons. The scenario is pretty similar when comparing or choosing other technologies for web, desktop, and mobile development. Node.js has a promising future and will surely eat a part of PHP’s marketplace, but the 20 years old scripting language can’t be ruled out yet.